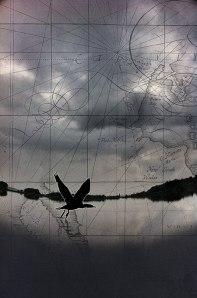 Around again our orbit wheels
Past drear and dreich northern months,
Until anglers rewound cast again
From their wooden clinkers.
When longer days’ winds whistle
And fetch and chop and slop the surface.
And, filled with heat and hunger,
The cormorants quit to seek
Saltier sustenance
From the deeper waters,
Of driven seas.

Steve Smart is a poet and visual artist who also has experience in information design. END_OF_DOCUMENT_TOKEN_TO_BE_REPLACED
This entry was posted on Sunday, March 17th, 2013 at 7:12 pm and tagged with poem, poetry, seasons, winter and posted in poetry, seasons, water. You can follow any responses to this entry through the RSS 2.0 feed.
« Digital Dust
Heliopause 2: A three tap toast »